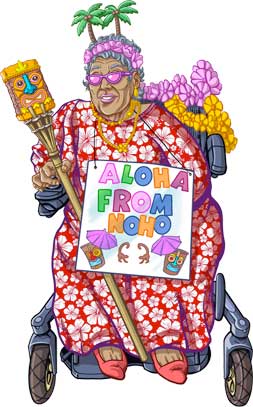 The DoozyDo Parade could never have gone from a quirky idea to an actual event without the assistance of The Indispensables. So, special thanks to –

Kevin Russell, for his artistic eye, his indefatigable and expert web construction and, with Fiona Russell, for trusting us with their ward, Gertrude the Gargoyle. Kevin “got” the parade immediately and cheerfully put in months of work on the art and website. Ever Forward!

Diane Porcella, Director of Northampton Neighbors, the human Swiss Army knife, combining creative ideas about how to make the parade more inclusive and more fun with a well-stocked rolodex, diplomatic skills, and a willingness to cheerfully plug in pretty much anywhere else needed.

Todd Barron of Applied Mortgage, for his critical early support, sage advice, first-ever financial contribution to the parade (at the Supreme Doozy Donor level), careful transport of Gertrude to and from the parade, and for his buoyant ability to see obstacles as opportunities.

Debin Bruce who put in months of work to make sure that the parade would be not only fun but safe, who led us in the creation of a detailed safety plan, and who contributed in myriad other ways — among them, arranging for drone videography at the start of the parade…and, oh yeah, balloons!

George Kreibel, a Renaissance Man if there ever was one — sculptor and paper-mache wizard, faithful note-taker, gear-head and vehicle organizer, and supervisor of gargoyle transportation safety.  Ready with clay, pen, drills and shims wherever necessary!

The DoozyDo Parade working group, each of whom, at one time or another, helped to make the parade a reality –

The Board of Northampton Neighbors, for believing in an offbeat project and supporting it all the way

The artists who together produced visual imagery for the parade’s website –
Dan Berger for his wonderfully drawn paraders, and
Dave Russo for the gracious gift of his imaginative Northampton street scenes

Kelsey Flynn, Bill Dwight and Dennis Lee for serving as our Grand-ish Marshals and Masters of Ceremonies

Tom McCabe for wise counsel, both visionary and specific, for offering to be a creative consultant and for being the first to sign up a team

Tracy Harrity, Executive Secretary in the Northampton Public School Central Office, for her kind and enthusiastic help distributing our DoozyDo school flyer to all principals and PTO reps who in turn informed the entire public-school community.

Russell J. McNiff, Sr., Past-President and -Grand Marshal of Holyoke’s St. Patrick Day Parade, for sharing his 50+ years of experience with the big picture and fine details of parade organizing

Melissa Dimetres, Events Coordinator for the Northampton Center for the Arts, for giving us a place to gather and step off at the start of the parade

Debra J’Anthony, Executive Director of the Academy of Music, for helping to make a post-parade gathering in Pulaski Park possible

Northampton Neighbors’ Communications Committee for heroic, detailed help with website construction and all aspects of publicity and the Development Committee for support in fundraising for the parade

Shardoul Parma for helping our Grand-ish Marshals ride in style!

Anna Hoff (The Pride Event), Jennifer Therkelsen (The Food Bank of Western Massachusetts), Sarah Strong and, later, Natalie Ulrich (The Hot Chocolate Run) for generously answering our initial and ongoing questions about how to mount a large event

Nanci Forrestall, Northampton’s Director of Parking, for helping us secure convenient parking for cars and floats in the Roundhouse Lot

A heartfelt Thanks to all,
Mark Karpel
“The Grand Fromage”