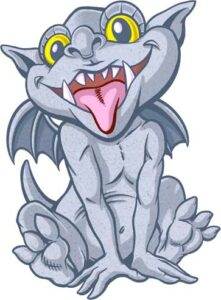 What is the parade date and time?
Northampton Neighbors’ DoozyDo Parade will take place on Saturday, September 17, 2022, rain or shine. The parade will begin at 11:00 am and last about 2 hours.

What is the parade route?
The parade kicks off from the Northampton Center for the Arts at 33 Hawley Street and ends outside the Academy of Music Theatre. See the Parade Route Map.

Where’s the best spot for viewing the parade?
Pretty much anywhere on Main Street.

Where can I get a selfie with Gertrude the Gargoyle?
Right in front of the Academy of Music Theatre at the end of the parade.

Parading in the Parade

How do the parade organizers decide who can join the parade?
Anyone who is willing to abide by the DoozyDo Rules and to contribute or raise funds for Northampton Neighbors can enter as a team or an individual–and you don’t need to live or work in Northampton. If you’re interested in supporting Northampton Neighbors through the DoozyDo Parade, we want to hear from you. You’re welcome to add to the general silliness or just to “come as you are.” All participants in the parade need to be kid-friendly (this isn’t Mardi Gras!) and apolitical. We want everyone to feel welcome and enjoy themselves. No causes, just people.

Where do the floats and other parade vehicles go at the end of the parade?
Floats and vehicles in the parade can park for free for several hours in designated areas of the Roundhouse parking lot near the bus station.

How can I get involved?

How can I get my business involved?

How can nonprofits get involved?

You can start your own DoozyDo Team. We understand that you have the same struggles we do to raise funds so we do not expect you to contribute or raise funds for Northampton Neighbors unless you want to.

Can I be a vendor at the parade?
In this first year, in order to keep things simple, we are not authorizing any vendors. But check with us next year to see if this changes. And we encourage parade participants to stroll around town after the parade, get a coffee or lunch and visit Northampton’s many cool shops.